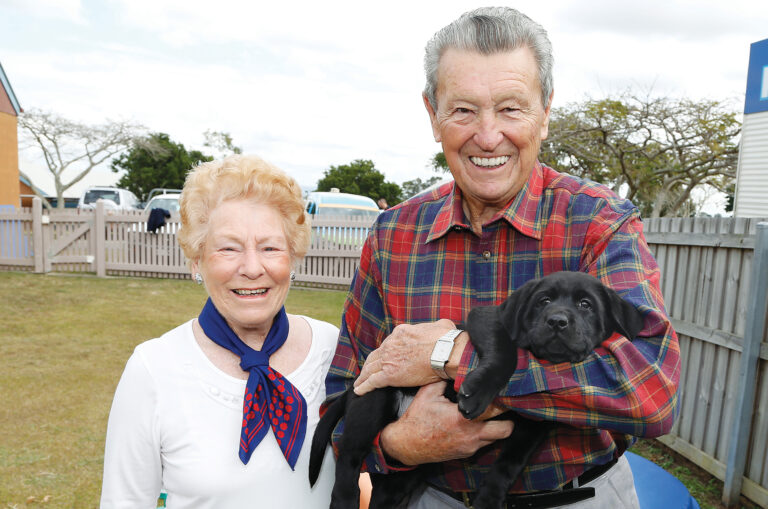 Through their generous and unwavering support over nearly two decades, Ray and Coral Trestrail have helped hundreds of people living with vision loss.

Their passion for helping people started at a very young age. Ray was just 16 when he began working in an aircraft engine factory in New South Wales.

Coral and Ray on site at Guide Dogs Queensland

“There were five blind men working in that factory,” Ray recalls, drawing on his memory from more than 75 years ago. “I was impressed by the range of their own abilities. There was one man in particular who I was in complete awe of. He would travel into the Sydney CBD on his own – without a cane or a dog – he just never let anything stop him. Over the years, I had long conversations with him and it always stuck with me just how important it was to help these people who had lost their vision.”

Coral volunteered for many years dictating the local newspaper’s stories onto tapes f or residents in her community who had low or no vision.

“I really loved it. I would always read the newspaper, and I felt that everyone deserved to have access to the news.”

After living most of their lives near the border of Victoria and New South Wales’ the Couple decided to move to Queensland in 2004.

“We used to help several charities that helped people with vision loss. Then, when we moved to Queensland, we became aware of the work of Guide Dogs Queensland. We were also at the age where we sorted our affairs and were fortunate enough to be in a position to donate to charities more seriously.”

Ray and Coral became passionate supporters, making regular donations and often visiting the Bald Hills centre. In 2008 they sponsored their first dog – ‘Winsome’ – and have continued sponsoring a litter every year since. Their support has resulted in 13 qualified guide dogs, including a couple of very special dogs named after their songs, ‘Glen’ and ‘Phil’.

Jim with his guide dog ‘Glen: one of the many dogs sponsored by Ray and Coral. Glen is named after their son.

Another seven of their sponsored dogs have gone on to join the breeding program to help create the next generation of guide dogs, while six pups are currently at various stages of their training.

“The difference a guide dog makes to a person’s life is incredible,” Ray says. “There are many ways we can support someone who is blind, but to be able to give them a guide dog is truly special. It is a gift of independence, of confidence, and the ability to live the life they choose. And that is priceless.”

In late 2019, Ray and Coral decided to extend their giving even further by supporting the construction of the Vet Clinic. They made an incredibly generous gift of $80,000 to help complete the clinic, in addition to their sponsorship of the ‘L’ litter.

“We both felt this was a wonderful project to support,” Ray explains. “A Vet Clinic enables the best care for the guide dogs, but also made good business sense as it reduced expenditure on external vets.”

In recognition of Ray and Coral’s contribution, the clinic’s operating theatre bears their name.

“We never did this for any recognition, but we are extremely proud that we have been able to help so many puppies become guide dogs and to help change so many people’s lives,” Ray says.

“We have been fortunate enough to have the money, and we have been more than happy to give it away for such a wonderful cause.”

If you would like to make a difference and sponsor a future guide dog, phone Michelle Hillman on 07 3500 9016.

An office packed full of support 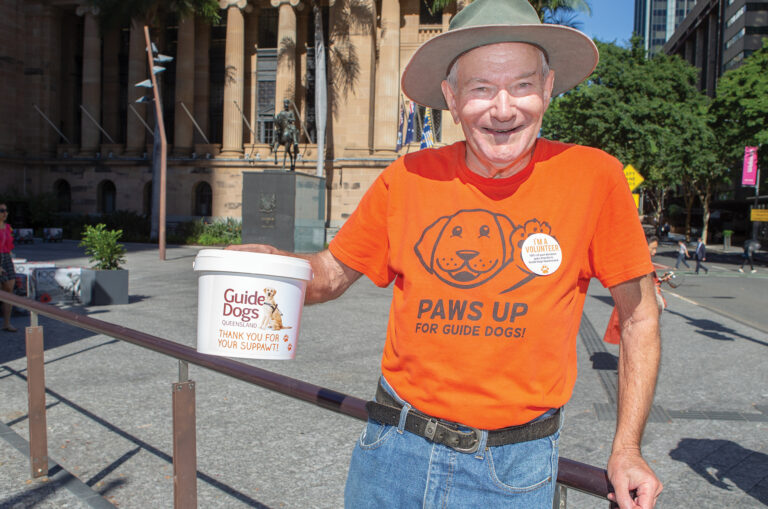